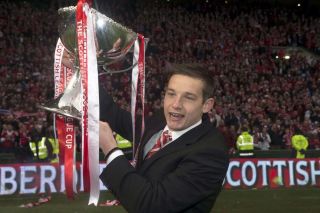 Peter Pawlett has backed Dundee United to handle the pressure of the Ladbrokes Premiership play-off final and return the club to where they believe they belong.

The Tangerines are desperate to escape the Championship after three years in the second tier.

This week’s two-legged clash with St Mirren gives head coach Robbie Neilson the chance to end their top-flight exile, but the threat of failure only raises the tension levels.

However, midfielder Pawlett is confident his team have seen enough over their careers to cope with the pressure.

Pawlett, United skipper Mark Reynolds and frontman Cammy Smith all have experience of dealing with the big occasion after playing a part in Aberdeen’s run to League Cup glory in 2014. Nicky Clark, meanwhile, had to cope with high expectations during his time at Rangers, and Osman Sow was a Championship winner with Hearts four years ago.

“This is a massive club and it needs to be in the Premiership, so we need to deal with that pressure,” said former Scotland Under-21 international Pawlett. “A lot of lads have come here because they want to embrace that challenge, so now we have to stand up and deal with it.

“In important games like this, it’s about riding our pressure and that’s the mentality we need to have. In this case, it’s a pressure we need to thrive on.

“Against Inverness in the last game, there was a bit of nervousness around Tannadice until the goals went in.

“After that we were able to relax and it will be important that we deal with the pressure again in the right way.

“I think a lot of us have played in these big games before, where there’s a lot of pressure. You learn how to handle it. You realise that it’s about managing your way through the 15 or 20 minutes when nerves are kicking in.

“If you can get through that you will get opportunities to score.”

United have already tasted victory over Saints this season after dumping them from the William Hill Scottish Cup back in February.

But Pawlett agrees with Buddies boss Oran Kearney that it will be a different side facing them this time around after they ended their Premiership campaign with a six-game unbeaten run.

He said: “These two games are all about getting through. Performance-wise we’re not bothered. We’re looking to go up, that’s the main objective, and we’ll do anything possible to get there.

“We’re coming off the back of a good result against Inverness (4-0 aggregate win), so we’re full of confidence.

“We’re confident in each other’s ability and we definitely feel as though we can get a result.

“St Mirren are hitting a bit of form too. It sounds like they’ve picked up an awful lot since we put them out of the cup, so it will be a different proposition.

“I watched them a few times on TV and, from what I’ve seen, they’ve definitely come on, but we’ll see on Thursday by how much.

“We’re not really thinking about their form, though. We’re just thinking about ourselves. We’re on a good run of form, we’re all fit and ready to go. That’s what we need to concentrate on.”