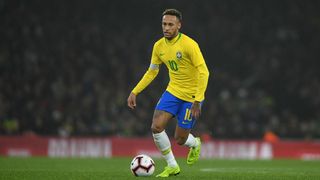 Pele finds it difficult to defend Neymar from criticism over what is perceived as excessive simulation and has urged the Paris Saint-Germain striker to make the most of his ability.

Brazil superstar Neymar came under fire for his on-field theatrics at the World Cup, where the Selecao were beaten in the quarter-finals by Belgium.

Three-time World Cup winner Pele has spoken to his fellow Santos product about his actions, which he finds it tough to reconcile.

"It's difficult to defend Neymar for all the things he does besides playing football. I spoke with him and reminded him of his ability," he told Folha de Sao Paulo.

"He was unlucky because Brazil did not win the World Cup and he was singled out.

"I've been with him in Europe twice. We talked and I explained: 'The God of football gave you the gift. What you do complicates it.'"

Pele believes Neymar is a better player than his fellow PSG forward Kylian Mbappe, who won the Best Young Player award as France triumphed at Russia 2018.

Mbappe became the first teenager to score a World Cup double since Pele in 1958 and his strike in the final saw him match another feat achieved by the legendary Brazilian.

"People compare me with Mbappe and there are similarities, right? But he is already 19. He won the World Cup," said Pele, who was joined by Mbappe as the only teenagers to score in a World Cup final.

"I think Neymar is a more complete player than him, but in Europe everyone speaks more about Mbappe."

There were concerns for Pele in January amid conflicting reports regarding his health after he pulled out of a scheduled appearance in the United Kingdom.

Offering an update, he said: "Thanks to God, I am well. I had three surgeries in the past years, but I'm not 100 per cent. I don't feel any more pain, I feel more weakness."