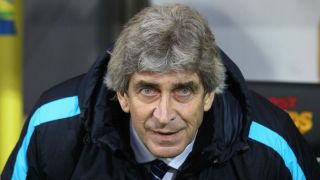 Manchester City manager Manuel Pellegrini believes his side are in the midst of one of their season's defining spells as they seek to keep hopes of a quadruple alive.

City booked their place in the fourth round of the FA Cup with victory over Norwich City on Saturday and return to Premier League action with games against Everton and Crystal Palace this week, seeking to overhaul pacesetters Arsenal and Leicester City.

A trip to West Ham is City's final league appointment of the month before they try to overturn a 2-1 deficit in their League Cup semi-final second leg against Everton.

Pellegrini's men will round off the month with the FA Cup's fourth round - prompting Pellegrini to call for focus in a crucial part of the season.

"It is always our aim at this club to be involved in all four competitions and January is a key month not only for the Premier League but also for both domestic cups," he told reporters.

"We have the second leg of the Capital One semi-final, we must try to continue in the next round of the FA Cup and in the Premier League it is important for us to close the gap on the two teams above us now because in February we start again in the Champions League.

"We have two home games in the Premier League, against Everton and Crystal Palace, and we must focus on those."

In the absence of captain Vincent Kompany, Eliaquim Mangala and Wilfried Bony, City eased past Norwich at Carrow Road thanks to goals from Sergio Aguero, Kelechi Iheanacho and Kevin De Bruyne.

Iheanacho's emergence has helped cover injuries to the likes of Bony and Aguero this season - the Nigerian scoring five times from just three starts in all competitions.

"There was a lot of criticism when we did not replace [Edin] Dzeko and [Alvaro] Negredo but when you have a young player who has the condition of Kelechi he deserves an opportunity," Pellegrini added.

"One of the most important things we are doing so far is that without Sergio, without many important players, we continue in all the competitions. This reflects the work we do every day."