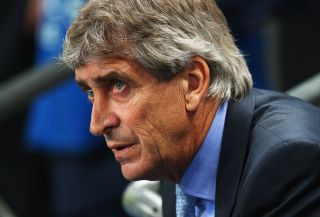 City were outplayed by the reigning champions in their UEFA Champions League Group D clash at the Etihad Stadium thanks to goals from Franck Ribery, Thomas Muller and Arjen Robben.

While Joe Hart was beaten at his near post for two of the goals, Pellegrini was more concerned by his side's overall showing.

"We played really bad today – it's not the team we've seen every week in the Premier League and I think that was the worst thing," he said.

"We didn't have possession and we didn't do enough to have more. Of course Bayern always have a lot of the ball but today wasn't a good day for us.

"It's your duty as journalists to analyse individual players, I think we didn't play well but of course we could do better on the goals, not only the goalkeeper."

Micah Richards, who was named in the starting line-up for the first time under Pellegrini, admitted that the Bundesliga side were worthy winners.

"We knew they were a good side and they showed it today," he told Sky Sports. "That's why they're the champions.

"We have to hold our hands up and say we got beaten by the better team."