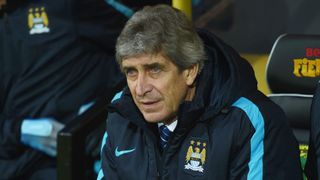 Not even a Premier League title could be enough to save Manuel Pellegrini's Manchester City future, but the Chilean manager believes his legacy at the club is secure.

City have made no efforts to publically reassure Pellegrini of his future at the club, with Pep Guardiola reportedly waiting in the wings having confirmed his exit from Bayern Munich at the end of the season as he looks to test his managerial skills in the Premier League.

City and local rivals Manchester United seem Guardiola's most likely destinations, but regardless of his future, Pellegrini believes he will be well remembered at the Etihad Stadium.

"For me the most important thing in these two years that I am here is that the style of play I never changed," Pellegrini said.

"It's an attractive style, fans enjoy that style and we are continuing playing that way.

"I think that reflects the work we do every day during the week.

"You have a style. Maybe you can receive some criticism that we didn’t have the results playing away, but I think the way to try to achieve those results is to play in this style and not change to play more defensive."

Pellegrini has guided City to one Premier League title in his first two seasons - topping the goalscoring charts both times - and could make it two from three, with City third and three points off the top of the table after 20 games.

City also remain in the hunt for the League Cup, FA Cup and Champions League and Pellegrini said he will not change his approach in any of the competitions.

"[Attacking football] is what fans deserve. If you have technical and important players you must have possession of the ball and demonstrate that they are good technically. They must also run and defend. But I always try to score more goals," he added.

"If we keep clean sheets it is very important, but I always prefer to score more."