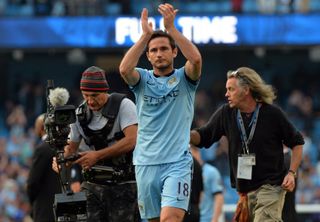 However, with New York City not due to join the MLS until next season, Lampard penned a temporary deal with City until January in August, scoring his first goal for the Premier League champions against his former side in Sunday's 1-1 draw at the Etihad Stadium

Reports in the British press suggested that City could look to increase Lampard's stay until February, which would make him eligible to face old club Chelsea again at Stamford Bridge in January.

Pellegrini has now suggested that City will assess the situation in the next transfer window.

"In January we will see what is happening and we will make a decision then," Pellegrini said.

The Chilean was speaking before City begin the defence of their League Cup title at home to Championship outfit Sheffield Wednesday.

Pellegrini confirmed that that star duo Sergio Aguero and David Silva will miss Wednesday's third round match with knee and ankle problems respectively, while Samir Nasri and Fernando (both groin) could come into contention for City's UEFA Champions League clash with Roma next Tuesday.

Striker Stevan Jovetic may come back into contention against Wednesday after showing improvements from a hamstring problem, but the Montenegrin may have to wait until City's clash with Hull City at the weekend.