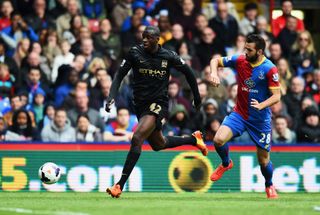 The Ivorian turned in a superb display as he made a goalscoring return from a thigh injury that had kept him sidelined since a 3-2 defeat at Liverpool a fortnight ago.

Toure doubled City's advantage after Edin Dzeko had opened the scoring from the midfielder's assist early on.

City are now back in control of their own destiny in the title race, after leaders Liverpool lost at home to Chelsea earlier in the day, and Pellegrini was quick to praise the efforts of Toure, who was withdrawn in the second half with his side in control.

"He was very important in both goals," said the Chilean. "Yaya only worked with the team the last two days - that's why he didn't play more than 60 minutes, but he's a very important player for us.

"The most important thing is that we don't just depend on just one player. We've had a lot of injuries, with Yaya and Sergio Aguero.

"We have a squad and in every game I try to choose the best players that we have fit for that moment.

"Having Yaya and having Sergio Aguero will always be very important.

"He (Toure) is a top player and in 10 days that he was injured, he didn't lose too much in his football condition.

"He just played 60 minutes because he was very tired, but he is a very important player for us."

City, three points behind Liverpool with a game in hand and a significantly superior goal difference, face Everton, Aston Villa and West Ham in their final three games.