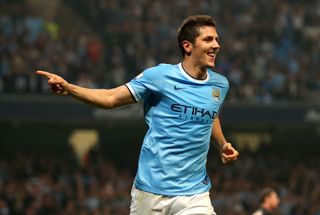 Pellegrini made 10 alterations from the side that thumped Manchester United 4-1 in the Premier League at the weekend, with Fernandinho the only man to keep his place.

Two goals from Stevan Jovetic along with strikes from Edin Dzeko, Yaya Toure and Jesus Navas saw City comfortably through to the fourth round of the competition.

And after the game Pellegrini revealed his delight with the way his side had kept up a high level of performance, despite the different personnel on display.

"I spoke with the players before this game, telling them that we must always try and play in the same way as we did on Sunday," he told the club's official website.

"We can change names but, for me, it was important to see today the same team we saw on Sunday – the same philosophy, the same intensity and of course, scoring 12 goals in a week is very important."

Jovetic's strikes were his first for the club since his move from Fiorentina and Pellegrini acknowledged the importance of him finally getting off the mark for City.

He was also quick to praise the impact of Toure - the Ivorian was a half-time substitute and was influential throughout his cameo performance before netting from a set-piece.

"It’s important for Stevan to score and play well," he added. "He wasn’t playing because he had some physical problems at the start of the season but the last two weeks he’s been working hard.

"Yaya is an excellent player – if he adds goals from free-kicks and in open play like last Sunday, well I think it’s important for us.

"We are always practicing, Yaya stays normally after our daily work to practice free-kicks. He’s in a good moment – it’s not normal to always score with free-kicks.