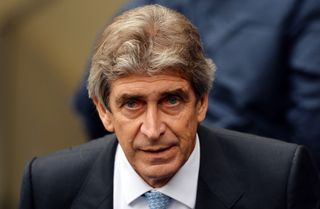 The Etihad Stadium outfit have dazzled in this campaign with a series of free-scoring performances, and currently occupy second position in the Premier League, just one point adrift of leaders Arsenal.

City also progressed to the knockout stages of the UEFA Champions League for the first time and will face La Liga champions Barcelona in the round of 16, while their position in the League Cup final was all but assured with a 6-0 demolition of West Ham in the semi-final first leg.

Next up is an FA Cup third-round replay with Blackburn Rovers after the sides played out a 1-1 draw in the first meeting, and Pellegrini is keen for his players to show a winning attitude to all competitions.

"It's important to have the mentality at least to try (to win all four)," Pellegrini said.

"During the season with injuries and the amount games we have to play it's very difficult, and that's why no one's done it before.

"But you must have the mentality to at least try to do it and that's what we're trying to do at this moment.

The Chilean insists he will name a strong side for the encounter, with Sergio Aguero in line to make his return from a month-long lay-off with a groin injury.

He added: "It's a very important cup because it's a very traditional cup, so the most important thing for this team is to have the mentality to try to win no matter what competition you are playing,

"If you make some rotations and the other team is strong they play better and win, then we would be eliminated. So, we will try to do well and try to continue."