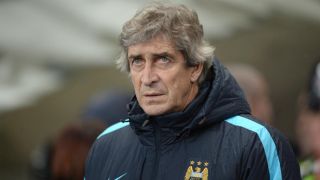 Manuel Pellegrini insists injury-hit Manchester City must continue to fight for trophies on all four fronts.

Third in the Premier League and through to the Champions League's round of 16, City travel to Norwich City in the third round of the FA Cup on Saturday having lost 2-1 in the first leg of their League Cup semi-final against Everton on Wednesday.

Striker Wilfried Bony missed out on Merseyside having taken a kick to the calf in training and he will not recover in time to face Norwich, while Pellegrini is happy for Willy Caballero to continue in goal for domestic cup action – giving regular number one Joe Hart a break.

"Willy will play both cups. For Joe it's good to work one complete week [in training] because we are playing so many games," Pellegrini told a media conference.

"Mangala and Bony are both still injured. We will know more tomorrow.

"Vincent is progressing, it's a muscle injury and we must not rush him.

"I think one of most important merits of this squad is to continue being in all the competitions with so many injuries.

"I hope in future we have the normal amount of players."

"We are going to be focused game by game. The priority for my team is to try and win every game. It doesn't matter which competition you are in."

"That gives you an ambitious mind and a winning mind."

Silva joined City from Valencia in 2010 and has won two Premier League titles, along with the 2011 FA Cup and 2014 League Cup.

"I think David demonstrates in every game how important he is," Pellegrini said.

"He is a different player, so technical, it's a gift to see him play, I hope he continues."