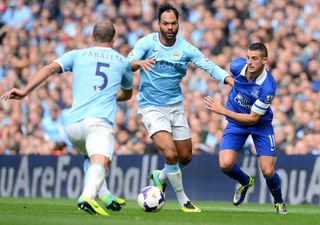 The centre-back has been linked with a host of clubs - including Besiktas, Newcastle United and Tottenham - after slipping behind Matija Nastasic and Martin Demichelis in the pecking order at City, making just eight Premier League appearances this term.

Although he has only played Lescott three times in the past month, Pellegrini is keen to retain the services of the former Everton man, at least until the end of the season.

When asked if Lescott was set to depart in January, the Chilean said: "Not for the moment.

"Joleon Lescott is a very important player for us. He finishes his contract in June. We will see what happens in the future.

"At this moment we are not considering (a loan). We will see in the future in the transfer window."

Pellegrini confirmed he will utilise the full strength of his squad for the Ewood Park trip after a hectic festive schedule.

"We are going to make changes because we are playing too often in the last weeks," he said.

"We are going to try to have a good squad and to win the first game in the FA Cup because it is an important cup for our team.

"We are going to play with exactly the same importance in every competition. It is a very traditional competition here in England."