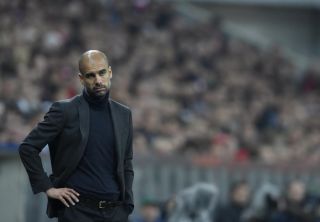 Cristiano Ronaldo and Sergio Ramos struck braces in Real's 4-0 second-leg thrashing of the Bundesliga champions at the Allianz Arena, completing a 5-0 aggregate victory.

Guardiola said it was his error that led to Bayern's loss, while he was unhappy with the way his team used the ball after having the majority of possession in both legs.

"We played badly when we had the ball. That's my responsibility. I made a mistake," the Spaniard told a news conference.

"It was a bit better in the first leg, but congratulations to Real Madrid."

Guardiola lamented his side's defending from set-pieces, with Ramos heading in a corner and free-kick in the first half.

Ronaldo netted on the counter-attack before half-time and completed the scoring with a cheeky free-kick which went under a jumping Bayern defensive wall.

"We have to carry on now. If you don't play well and you defend set-pieces badly, that's just how it is. You are being punished," Guardiola said.

"We are at the highest level in Europe; such mistakes are punished right away."

Guardiola said he had been hopeful Bayern could reproduce the performances they put in against Premier League sides Arsenal and Manchester United earlier in the knockout stages.

"What we did against Arsenal and Manchester (United) did not work today," he said.

"Also in the first leg in Madrid we had more control than today and at least a couple of chances. Today, just a few. That's why we have lost the semi-final.

"You play with the ball and if you don't have it that doesn't work."