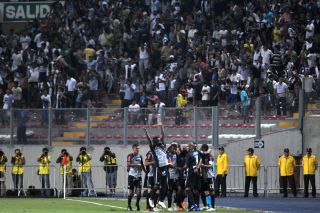 The Group A leaders were not punished, however, with second-placed Sporting Cristal also losing.

Alianza took the lead in the 25 minute when Walter Ibanez converted his spot-kick but the same player tied the game seven minutes later as he put through his own net.

Luis Trujillo struck the winner for Alianza on 61 minutes as Garcilaso's poor run of form continued.

But Garcilaso escaped losing top spot of Group A as Cristal went down 2-1 at Sport Huancayo.

Cristal have now only won one of the last four games as they again missed an opportunity to overhaul Garcilaso, who have been runaway leader of Group A.

In Group B, Universitario are three points clear on top after a 1-1 draw at Cienciano.

Junior Castrillon looked to have secured the win for Cienciano with a 78th minute goal before Universitario scrambled an equaliser two minutes from time.

Cajamarca were handed an advantage when Galvez defender Jersson Vasquez was shown a second yellow on 73 minutes but left it late to snatch victory.

In other matches, Leon de Huanaco came from behind to defeat Universidad San Martin 2-1, Juan Aurich swept aside Inti Gas by a 3-1 scoreline, Melgar and Pacifico drew 1-1 and there was a goalless draw between Cesar Vallejo and Union Comercio.