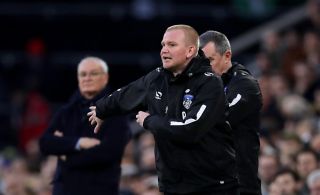 Oldham have appointed former caretaker manager Pete Wild as head coach for the rest of the season as they move on from Paul Scholes.

Scholes quit the League Two club last week just 31 days into an 18-month contract, stating it “became clear that I would not be able to operate as I intended and was led to believe prior to taking on the role”.

The former Manchester United midfielder had replaced Wild after the ex-academy coach had overseen four wins – including an FA Cup victory over Premier League Fulham – having replaced previous manager Frankie Bunn on a temporary basis.

Wild has now been brought back to see the club through to the end of the campaign.

“I’m looking forward to working with the players again and hopefully finishing on a positive note,” he said.

“I know this team has quality and hopefully the fans will see the best of these players from now until the end of the season.”