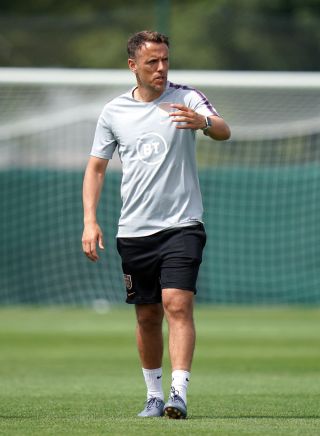 Phil Neville is keen for England to send out a “strong statement” to their rivals at the Women’s World Cup by completing their Group D matches with a 100 per cent record.

The Lionesses’ first two group games in France have seen them defeat Scotland 2-1 and Argentina 1-0.

Qualification for the last 16 has been secured, and a draw against second-placed Japan in Nice on Wednesday will be enough for England to cement top spot.

At his pre-match press conference at the Allianz Riviera, boss Neville stressed he was looking for a victory from the contest and would be “picking my best team” to achieve that.

He said: “I want us to have played three, won three, and affect the mindset of other people in the tournament, but more importantly give my players more confidence.

“The belief in the dressing room after the Argentina game – even though we only won 1-0 – was a really great feeling because it was another win, and that’s why we need to win tomorrow night.

“Forget the group permutations – I think playing three, winning three in a group everyone said was the ‘group of death’ would send a strong statement.

Put your hands up if you're ready for match day….😏#Lionessespic.twitter.com/2VQoKhZACD— Lionesses (@Lionesses) June 18, 2019

“We’re watching USA play, we’re watching Germany, France. They’re winning their groups and we need to keep up with them.”

As well as wins, Neville wants “more ruthlessness” from his players in terms of goals.

“I think the only thing missing from our game is a 3-0 or 4-0 victory, or a victory where it’s not just by one goal,” Neville said when asked what needed to improve performance-wise from the Scotland and Argentina wins.

“I think there needs to be a bit more ruthlessness in the final third from all of our players. The scorelines we’ve had so far don’t reflect the dominance and the performance.

“You think, you hope that there is a real good scoreline coming up, for a team that is going to get punished for all the chances we’re making and the dominance we’re having.

“I hope that moving into the tournament that we start banging in the goals and getting the just rewards.

“My forward players are disappointed that they have not got two or three goals under their belt. My players want to be challenging for the Golden Boot.”

Can you feel our support?! #LionessesDaily— Lionesses (@Lionesses) June 18, 2019

Neville says “everyone is fit”, and responded to a question about potentially resting players, given a place in the next round had been sealed, by saying once again: “I’m going to play my best team.”

The 42-year-old, who made four changes to his starting XI for the Argentina match, also said regarding his squad members who have not yet played at the tournament in France: “I would have thought probably in the next couple of games there will be opportunities for those as well.

“We’ve got to make sure that we balance the energy in the squad and keep the players that need the energy fresh.”

Neville was also asked if he was disappointed England’s Under-21s travelled to Italy for their European Championships campaign via a private jet while his players had taken a commercial flight to France.

He said: “We’ve been backed unbelievably.

“At St George’s Park, the senior men were in there, the under-21s were in there, and we got the number one England hub. We’ve been getting the best pitches, we’ve got the best support, and our preparation has been great.

“For us it’s not an issue because we are happy. We are focused on winning a World Cup, and let the powers that be and other people decide what we get and what we don’t get.

“For me, we are having the time of our lives and we’re staying in great hotels. We are being looked after by FIFA, and nothing I’ve ever asked for has never been given to me.”