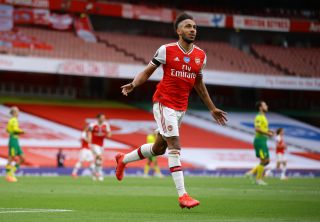 Arsenal captain Pierre-Emerick Aubameyang returned to goalscoring form as he was gifted a brace by a Norwich side seemingly certain for Premier League relegation.

The Gunners seem to have found their flow following a slow restart and ran out 4-0 winners on their first Emirates Stadium appearance in almost four months.

Norwich threatened at times, especially in the second half, but a porous defence remains their Achilles heel as Aubameyang was twice teed up by opposing players, either side of laying on Granit Xhaka’s first goal of the campaign.

There was even time for Cedric Soares, signed on loan from Southampton in January in a move made permanent last week, to mark his return from injury with a debut goal.

Head over heels to be home 🔄#ARSNORpic.twitter.com/iNmLHpRt1M— Arsenal (@Arsenal) July 1, 2020

He had not scored in his last four league games, his worst barren spell for over five years, but his goals here mean Arsenal move up to seventh and ahead of north London rivals Tottenham.

After an even start it was unsurprisingly the hosts who had the first decent chance, Aubameyang seeing his low effort pushed clear by Krul.

Norwich’s first effort came from an unexpected source as centre-back Ben Godfrey, without a goal at this level, had Emiliano Martinez sprawling across his goal as a 30-yard strike fizzed wide.

Alexandre Lacazette then headed straight into the hands of Krul – but the Norwich stopper would soon be left red-faced.

Arsenal had opened the scoring at Southampton last weekend following a goalkeeping error and Krul mimicked Alex McCarthy here, dawdling in possession and striking his clearance straight at Aubameyang, who tucked home into an empty net.

Four minutes later and the game was taken away from Norwich, Kieran Tierney and Aubameyang combining before the latter fed Xhaka, who hit his first league goal in almost 14 months.

Norwich boss Daniel Farke reacted by making a trio of half-time changes and it was one of those, Adam Idah, who drew another smart stop out of Martinez soon after the restart.

Still chasing the game, the Norwich bench were left incensed as referee Peter Bankes and the video assistant referee decided that Sead Kolasinac had not fouled Todd Cantwell inside the box.

Farke’s men had looked sharper for most of the second half, until their defensive frailties were once again laid bare for all to see.

A Norwich throw-in inside their own half was sent towards substitute Josip Drmic, who opted to send the ball back into the Canaries’ penalty area and straight to Aubameyang – the Gabon striker more than happy to oblige in finishing for his second of the night.

The gloss was applied to this Arsenal display by debutant Soares, who needed just four minutes to mark his long-awaited bow with a goal as he struck from the edge of the box.