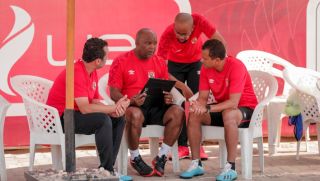 The Red Devil traveled to Morocco for the semi-final first leg clash against Wydad which will take place at the Stade Mohommed V Stadium before returning to Egypt for the second leg encounter at the Borg Al Arab Stadium on 23 October.

Al Ahly are yet to concede a defeat under the tutelage of Mosimane, having claimed two straight wins in the Egyptian Premier League against Al Mokawloon and ENPPI before playing to a draw against Pyramid FC in the last match.

Mosimane will be pleased by the fact that both Ali Malooul and Geraldo has rejoined the squad in Morocco after finishing their national team duties, while Mahmoud Kahraba has travelled with the squad, despite sustaining a hamstring injury.