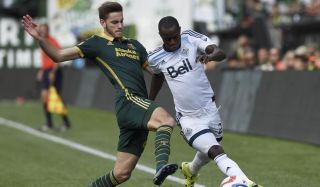 As he enters his fourth season with the Vancouver Whitecaps, Kekuta Manneh has set himself some lofty targets after offering many glimpses of his potential since arriving in MLS back in 2013.

Like the Whitecaps, the 21-year-old can look back on 2015 with a certain amount of satisfaction. He made more appearances (32) and starts (28) than in either of his first two years with Vancouver, even though it did not yield higher numbers on the scoresheet.

Though still shaking off the effects of an ankle injury suffered in the MLS Cup Playoffs, the Gambian-born youngster is keen to stand out among a talented group of Whitecaps attackers this season and improve on the seven goals and six assists he registered last year.

Blessed with blazing speed and a nose for goal, Manneh has had a regular habit of getting into excellent scoring positions, but often falls short of the finishing product. It is an area of his game that the West African native has identified as his most pressing need for improvement.

“Definitely, finishing,” Manneh admitted. “I had a lot of chances (last season). I think the good thing is I put myself in good situations to score goals. I just need to take them. I feel last year I could have scored a lot more goals and had a lot more assists. Those are the things I’ll be looking to improve on this year.”

If Manneh is to reach his goals this season, he will have to work his way into the starting XI – something that will be an ongoing challenge after head coach Carl Robinson made notable additions to his attack in the offseason.

“It’s going to be tough. A few people are going to be unhappy this year, but it’s part of the game,” Manneh said. “We need that in the squad in order for us to achieve what we want to achieve. We want to win the MLS Cup and the Canadian Championship. For us to do that, we need competition. I feel we have the depth this year to win something.”

Manneh’s performances over the past three seasons have caught the eye of many MLS fans, especially in the United States. Though born in Gambia, the attacker is now a permanent U.S. resident after moving to Austin, Texas, to live with his adopted family at the age of 15. In a bid to accelerate his process of obtaining American citizenship, the youngster now makes his home in nearby Point Roberts, Washington, during the season.

Though he is keen to become an American citizen, Manneh has yet to make any commitments regarding his future at the international level. “I haven’t decided yet if I want to play for Gambia or the U.S.,” he said. “As soon as I get an (American) passport, I have more options, and then I’ll know if I can decide to choose to play for either Gambia or the U.S. That’s in my mindset right now, so it’s a matter of time as to who I decide to play for.”

For now, Manneh’s focus is Vancouver and the potential he feels the Blue and White have to make real noise in MLS this season.