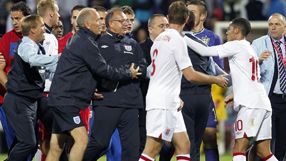 "According to the instructions of the public prosecutor's office in Krusevac, they have been charged with violent conduct at a public sports event on October 16 at the Mladost stadium.

"The three fans have been charged with the use of fireworks."

None of those charged were identified.

A brawl involving players and staff from both sides broke out after the second leg match which England won 1-0 to seal a 2-0 aggregate victory and reach next year's finals in Israel.

England left-back Danny Rose, who was sent off along with Serbia's Nikola Ninkovic, said he was racially abused and pelted with missiles by the home fans before, during and after the game.

The Serbian Football Association denied the racism charges and UEFA's disciplinary committee is to review the video evidence before announcing its verdict on November 22.

The English Football Association reacted to the announcement of the Serbian police charges by pledging to support its players and staff.

"We are in contact with the British Government for advice as well as speaking with our colleagues at UEFA," said the FA in a statement. "The FA reiterates its position of full support for all players and staff caught up in the appalling scenes in Serbia.

"We want to reassure those concerned that we are committed to doing everything necessary to protect them whilst also offering support to individuals and their families."