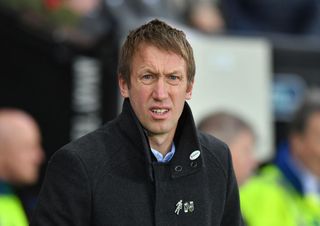 Graham Potter admitted Swansea weren’t ready for the Championship play-off spots after their already-slim promotion hopes were ended by a 2-2 draw with Hull.

Swansea’s Scotland international Oli McBurnie moved to 23 goals for the season with strikes in either half and, at that stage, Potter’s side looked on course for a seventh straight home win.

But, out of nowhere, Hull did enough to earn a point as Jarrod Bowen and Nouha Dicko both scored within seven minutes to end Swansea’s chances of finishing in the top six.

“These results, while disappointing, are part of the process to get better,” said Swansea boss Potter.

“The reality of it, if we are being fair, is we probably we are not ready to be part of that top six. We have not been good enough to be in that top six for much of the season.

“In terms of minutes for under-23 players we are the highest in the Championship and that comes with the process where you have to go through a bit of pain.

“It’s a big boost for us and an obvious one. It was just a formality,” said Potter.

“Mike is one of the best Championship centre-backs and the challenge for him is to be a Premier League centre-back. Hopefully we will help him get there.

“We have a lot of work to do in the summer. We’ve got the nucleus of a good group and I’m looking forward to trying to shape and improve this squad.”

Swansea went to the break 1-0 up against a limited Hull side when McBurnie tapped home Wayne Routledge’s cross.

He doubled the advantage in the second half by nodding a delivery from Dan James past George Long, but Swansea then switched off at the back.

Bowen pulled one back to make it 22 goals for the season when he poked home and Dicko earned Hull a point when he converted a cross from fellow substitute Jon Toral.

“We have demonstrated again how much character and spirit there is in this team,” said Hull manager Nigel Adkins.

“We were very respectful of a very good Swansea side. They have the highest possession and pass completion rate in the Championship so we changed our formation and tried to nullify them.

“I was disappointed to concede a couple of goals, but we got back into it. The encouraging thing is every player on the field is under contract for next season.”