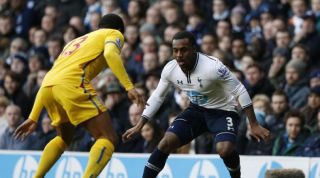 A first-half Danny Rose goal maintained the visitors' impressive record against 10-man Stoke, giving them their sixth win from the last nine Premier League encounters between the two, and kept Tim Sherwood's men in the hunt for the European places.

Stoke, who had Ryan Shawcross sent off just after half-time for two bookable offences, had won their last four home games and were unbeaten at the Britannia Stadium since January.

But Rose's first Premier League goal of the season settled matters, as he headed the visitors in front following good work from Emmanuel Adebayor.

Stoke's task was made harder when Shawcross received his second booking for a challenge on Rose, who was barracked by the home crowd at every opportunity thereafter.

And although they piled on the pressure in the hunt for an equaliser late on, they were kept out by a combination of some desperate defending and wayward finishing.

Tottenham made the early running and Stoke goalkeeper Asmir Begovic had to scramble in the opening minutes to touch Aaron Lennon's cross wide at his near post, after the England winger had deceived Marc Muniesa – deputising for the ill Erik Pieters in the hosts' starting XI.

Stoke responded strongly and the returning Michael Dawson blocked a dangerous Geoff Cameron cross with Peter Crouch lurking, and then threw himself at a loose ball to block as Steven N'Zonzi was about to shoot.

Crouch was causing problems for his former side, and there was a nervous moment for Tottenham after 20 minutes when Hugo Lloris could only grab a deep Peter Odemwingie cross at the second attempt, with Crouch using his physical presence to unsettle the French keeper.

Midfielder Stephen Ireland fashioned Stoke's first real chance in the 25th minute when he was allowed to run at the retreating Tottenham defence and curled a shot from the edge of the area narrowly wide of Lloris' left-hand post. Tottenham broke away immediately on the counter-attack and Harry Kane tested Begovic with a low shot that the keeper smothered comfortably.

The decisive moment of the match came after 32 minutes when Rose got ahead of Cameron at the back post and powerfully headed home a dinked cross from Adebayor to give Tottenham the lead.

Kane nearly made it 2-0 a few seconds before the break, but his effort from just inside the box was blocked when he perhaps should have got a shot away first time.

Stoke had the first chance of the second period when Marko Arnautovic cut in from the left and fired wide from 16 yards.

But boss Mark Hughes saw his plans left in tatters when captain Shawcross was sent off in the 53rd minute.

The defender was shown a second yellow card after appearing to aim a kick at goalscorer Rose, having already been cautioned a minute before the break for a foul on Christian Eriksen.

As the home crowd's frustration grew, an unmarked Odemwingie should have levelled for Stoke after 63 minutes when he met an inviting cross from substitute Pieters, but he flashed a point-blank header over.

A few seconds later, Arnautovic was played through the centre, only for Younes Kaboul to divert his shot wide.

Lloris then made a fine save from Arnautovic on the turn before Eriksen almost doubled Tottenham's lead with 12 minutes left when he curled a free-kick just over the crossbar.

There was still time for a late Stoke chance when Arnautovic was played through again, but he could only strike a tame shot straight at Lloris as Tottenham closed the gap on fourth-placed Arsenal to four points, while defeat leaves Stoke still with work to do to secure a first Premier League top-half finish.