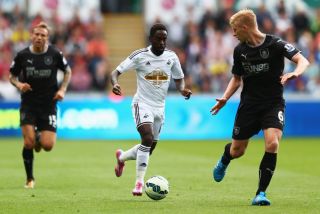 Garry Monk's men kicked off their campaign with a shock 2-1 success at Manchester United last weekend, but had to turn in a resolute second-half display to hold off a battling Burnley side.

The visitors threatened on a couple of occasions early on, but Swansea soon settled and showed great composure in dominating possession.

Nathan Dyer – a former Burnley loanee - deservedly put the home side in front following a darting run down the right in the 23rd minute and Swansea remained in control for the rest of the opening period.

Sean Dyche's Burnley team emerged for the second half with renewed energy, but saw a number of golden opportunities to equalise come and go.

Swansea held firm to claim all three points, while Burnley's search for a first win on their top-flight return goes on.

Both sides were unchanged from the opening weekend of the season, and Scott Arfield, who opened the scoring for Burnley in a 3-1 defeat to Chelsea on Monday, got the first sight of goal inside two minutes, but skewed his effort well wide of the target.

The visitors had to be alert moments later as Swansea broke quickly, Jason Shackell on hand to clear Wilfried Bony's header from a Wayne Routledge cross off the line.

Danny Ings fired narrowly over after being teed up by Lukas Jutkiewicz in the eighth minute and the forward was a central figure again as Burnley worked their way into the Swansea box moments later – goalkeeper Lukasz Fabianski eventually thwarting the move.

Gylfi Sigurdsson should have put Swansea in front 18 minutes in, but Tom Heaton got down well to his left to deny the Iceland international's tame close-range effort from another Routledge cross.

But Swansea did break the deadlock five minutes later.

Dyer was given the space to sprint down the right into the Burnley area and, with options to his left, elected to go for goal himself, sneaking the ball inside the right-hand upright via a touch from the outstretched arm of Heaton.

Swansea dominated possession for the remainder of the half, but were unable to stretch their advantage as Sigurdsson volleyed over just before the break.

Burnley began the second half brightly and Ashley Williams had to dive in to deflect a Jutkiewicz strike wide after Jordi Amat's misplaced pass in the Swansea area, before Arfield ballooned an effort over Fabianski's crossbar.

Jutkiewicz eluded the Swansea defence to head agonisingly over the crossbar just after the hour mark as the visitors continued to press, and Fabianski touched wide from a low David Jones effort to keep the hosts in front.

Swansea's best chance of the second half fell to Ki Sung-yueng, but the South Korean was unable to keep his shot down after substitute Bafetimbi Gomis had come within inches of meeting a Jefferson Montero cross from the left.

In the end it did not matter, as Swansea held on for a second Premier League victory of 2014-15.