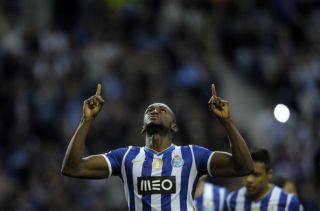 Miguel Rosa's goal after 24 minutes was enough to secure a 1-0 win at Gil Vicente that puts them within two points of safety.

At the other end of the table, Porto remain third after a routine 3-1 win over Academia, thanks to three first-half goals.

The league's top goalscorer Jackson Martinez notched in the fourth minute before Nabil Ghilas grabbed a second midway through the half.

Martinez doubled his tally from the spot five minutes before half-time and although Marcos Paulo gave Academia a second-half consolation, they slumped to defeat and remain six points from the Europa League places.

Fifth place Nacional's European aspirations were dealt a blow with a 3-0 defeat at mid-table Vitoria Setubal.

Rafael Martins scored an early penalty and followed it up with his second in the 38th minute, before Ricardo Horta confirmed an emphatic win midway through the second half.

Nacional's misery was compounded when Candeias was shown a straight red card with 15 minutes remaining and their third defat in the last five games means Braga are only three points behind in sixth.

Maritimo enhanced their own European hopes, as Derley's 14th minute goal was enough to secure a 1-0 win over Arouca.

It leaves Pedro Martins' side four points from fifth, while Arouca will be anxious because they are four points clear of the bottom two in 13th.