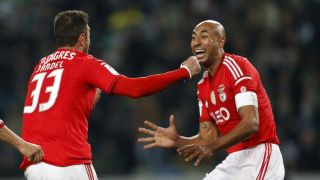 The leaders marked their 111th anniversary in style by recording a fifth league game without defeat, as they opened up a seven-point advantage over Porto.

Julen Lopetegui's second-placed Porto welcome Sporting Lisbon in the clash of the weekend on Sunday, where victory for the hosts will render the title tussle all-but a two-horse race.

Benfica, however, will take some stopping on the evidence of their latest display.

Four goals before half-time against Estoril ended the game as a contest, with Brazilian defender Luisao opening the scoring after 16 minutes before Eduardo Salvio, Pizzi and Jonas all struck.

A penalty from Lima after 56 minutes put further gloss on the scoreline and, after Estoril had seen Nigerian Anderson Esiti sent off for a second bookable offence, Jonas made it six late on - sending Estoril to a fifth straight defeat.

Elsewhere, Sporting Braga kept up their pursuit of third place with a 2-0 win at Rio Ave, courtesy of second-half goals from Ze Luis and substitute Salvador Agra.

In the day's early fixture, Gil Vicente and Boavista shared a 1-1 draw, while Nacional and Vitoria Setubal will be forced to try again on Sunday after their clash was abandoned 12 minutes in due to heavy fog.