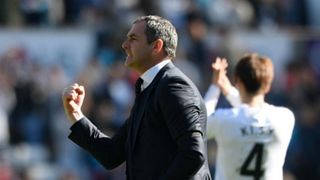 Paul Clement believes his Swansea City side have renewed momentum in their bid to secure Premier League survival following a 2-0 victory over Stoke City.

Swansea halted their six-match winless streak with a dominant display against a lacklustre Stoke at the Liberty Stadium, although Marko Arnautovic's penalty miss proved pivotal.

After Fernando Llorente had put Swansea ahead early on, Arnautovic fired over from the spot in the 69th minute, with Tom Carroll's deflected long-range strike wrapping up the points 60 seconds later.

And although Hull City's win over Watford means the Tigers remain two points ahead of Swansea, Clement is confident his side will take this winning form into the final four games of the season.

"I am very proud of the team today," Clement told BBC Sport. "I thought it was a must-win game and it was absolutely right. If the gap had gone to five points with four to play the task would have been very difficult.

"Nothing changed between us and Hull but what has changed is we have got momentum now. We played terrific. We rode our luck but overall deserved to win and can look forward.

"We got a bit of luck. Even the goal, it was a fantastic strike from Tom and the deflection took it right into the top corner.

"I knew at half-time it was 0-0 at Hull and they were down to 10 men. It is a terrific result for them. I did feel it would be a game they would win.

"We have to concentrate on our jobs. We have massive game next week at Old Trafford.

"I thought we needed three wins and a draw. Hull are in the driving seat but we will chase them down until the last moment."

Stoke, meanwhile, have now lost five of their last six games, and Hughes acknowledged that his team were not up to par in south Wales.

"We made it difficult for ourselves. If you are away you have got to make sure you are in the game and don't concede early and that is what we did," Hughes told BBC Sport.

"We hadn't got going. At 1-0 for the most part we were okay but clearly the game has changed on missing the penalty - if we could get back on terms, who knows?

"We need to be better at managing the game and affecting the opposition."