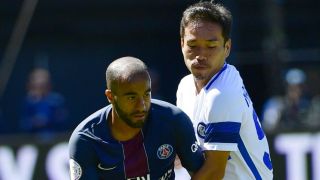 Paris Saint-Germain forward Lucas Moura says the Ligue 1 champions are a tougher side who are better at winning back possession under Unai Emery.

Emery replaced Laurent Blanc as head coach in June, having guided Sevilla to a third Europa League title in a row, with PSG aiming to add European glory to their unrivalled domestic dominance.

A 3-1 International Champions Cup victory over Inter showed signs that PSG are already beginning to develop under their new boss.

And Lucas feels they could benefit from a tougher approach and working harder without the ball in the coming campaign - qualities he suggests they lacked under Blanc.

"I think that we've started to do things that the new coach asks of us," he said after the win, as quoted by L'Equipe. "Our team is a bit different this season. We're a bit tougher.

"Everyone wants to see a good PSG this season. We're working hard tactically and positionally. It's very intense. You saw that against Inter.

"As soon as we lose the ball, we try to get it back as soon as possible. That wasn't the case before, and it was a problem."