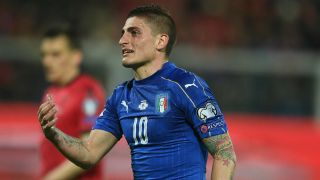 Marquinhos has urged Marco Verratti to resist any approach from Barcelona and stay with Paris Saint-Germain, whose project remains on track.

The midfielder has been heavily linked with a move to Camp Nou ahead of the 2017-18 season after a poor campaign for PSG saw them crash out of the Champions League to Barcelona in the last 16 and fail to win Ligue 1 for the first time in five years.

Former PSG director of football Patrick Kluivert revealed this week that Verratti does want to move to Barcelona, but the Ligue 1 club are eager to hold on to the Italy international.

Marquinhos is confident the 24-year-old will end up staying with Unai Emery's men and thinks that would be the right outcome.

"From a distance I have read a lot, but I don't know where the truth is," Marquinhos said to L'Equipe.

"Marco has never told me he wants to leave PSG.

"He is a great player and an important part of PSG's project, so I wish for Marco to stay with us.

"I do not want him to go and, frankly, I don't think he will leave us.

"Many have said that the PSG project has been lost, but I don't agree – it is under control. It is not a straight line to the top, but we know where we want to go and how to get there."

Relive how PSG clinched their fourth straight title this past season June 21, 2017

Marquinhos added: "We have all learned a lot this season. The start was difficult as we adapted to the new coach's philosophy but in January we really found our style. We were very efficient from then, except obviously in the match against Barcelona.

"We won three titles, which is not insignificant. We were second in Ligue 1 behind Monaco and the league was really competitive.

"It was a disappointing season, but it could be important for the future. We have learned a lot and can use that to do better in the Champions League and to be stronger in the league.

"People thought it would be easy for us to win everything, but the top level of football is highly competitive and complicated.

"We still have a very strong and intelligent team, who are learning from the mistakes of the past and will reach their objectives."