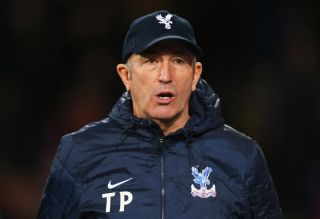 Pulis was installed as manager at Selhurst Park in the lead up to November's 1-0 victory over Hull City, with the club having won just once in the Premier League prior to that encounter.

However, Palace have flourished under the stewardship of the Welshman, with the former Stoke City boss overseeing 11 top-flight victories.

A run of five straight league wins prior to Sunday's 2-0 defeat to title hopefuls Manchester City has propelled Palace to 11th in the table, just one point adrift of Stoke.

Despite those heroics, Pulis is keen for everyone at the club to remain grounded and believes his side will be considered relegation candidates along with the three teams that are promoted from the Championship.

"The three clubs that come up - plus ourselves - will again be the favourites to get relegated," Pulis is quoted as saying by the Daily Mirror.

"People have truthfully got to keep their feet on the ground. This year has been unbelievable. A remarkable achievement.

"You mustn't take your foot off the pedal and get complacent expecting more and more. That's what other clubs do and get in trouble."