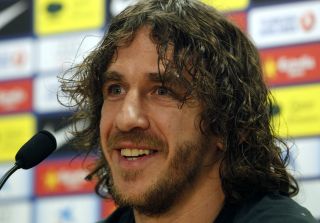 The Catalan giants went into the match having won their last 13 La Liga games, but with Lionel Messi only fit enough to start on the bench, they lacked a spark in attack.

Neymar and company created a number of chances, but they were ultimately left disappointed as they all went begging, with Cesc Fabregas the guilty party on several occasions.

Puyol - making his first appearance since March following a knee injury - was quick to point to Barca's control of the match, but he rued his team-mates' lack of sharpness in attack as they failed to score in a league game for the first time in 64 outings.

"We knew it was going to be a tough game. It's a difficult ground to go to, and we had our chances and controlled the game. We lacked that final pass," admitted the Spain defender.

"We've picked up another point, and despite going for all three it wasn’t to be. We controlled the game but weren't that sharp in the final third."

The result may have disappointed Puyol, but he was still happy to be involved after seven months out injured and he is confident that he can still be an asset on and off the pitch for coach Gerardo Martino.

He added: "I feel better every day. I'm happy with the way I feel but not with the result. I want to contribute as much as I can, both on and off the pitch.

"We're in good shape and we're fighting for the same objectives."

Barca coach Martino was bemused as to how his side had failed to find the net even once, but he accepts that draws are a part of football.

He said: "With the chances we created, we normally win such games. I'm happy with the performance mainly because Osasuna was playing at home and are a dangerous rival on the counter attack, and we haven't suffered in defence.

"But in the first half the final ball was lacking. As for our game, we didn't take a step back, so in that respect the draw is not worrying. Sometimes you draw."