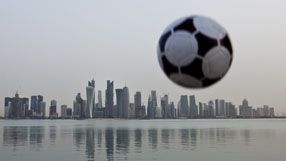 The finals were awarded to Qatar by world governing body FIFA in 2010 and are due to be held in the summer months when the temperature can reach more than 40 degrees Celsius. In December and January the average is a far less intense 17 degrees.

"I think sometimes a change is good - it would be great to have it in the winter," Dutchman De Boer, who ended his glittering playing career in Qatar, told delegates at the Leaders In Football business convention at Stamford Bridge.

"Everyone will be fit, physically fit, mentally fit and I don't see a problem with it. For the fans I think it will be great."

Nasser Al-Khater, the organising committee's communications and marketing director, said for the time being no changes could be made to the schedule.

"When we bid, we bid to host it in summer and until the football authorities ask us to move it, that's when it will go ahead," he told delegates.

However, De Boer, who works for the Qatari FA as a technical advisor, echoed the thoughts of UEFA President Michel Platini, who cast his vote as a FIFA executive committee member for Qatar and strongly favours a winter finals.

"When the African Cup of Nations is on, if you have an African player at your club he has to go and play for his country," said former Barcelona and Ajax Amsterdam defender De Boer in reference to the tournament.

"They play in January and February. And not every league is in sync with the big European leagues: in Russia and Scandinavia they start earlier, and in the United States they have a different schedule."

Until Thursday, Platini had been a lone senior voice in calling for a winter finals.

However, Karen Espelund, a UEFA executive committee member speaking during an earlier debate, said a special presidents' and general secretaries' congress would be held in due course where a debate on a winter finals would be on the agenda.

"I think all the bodies should come together to find a common solution and try also to change," De Boer told reporters. "It's very easy to stick with the old thing because we've done it already for years.

"I think it's great what Platini said, it's the first step," he added.

"We went for the summer of course, that's what Nasser said, but you have a lot of people doubting that and you look for other possibilities."