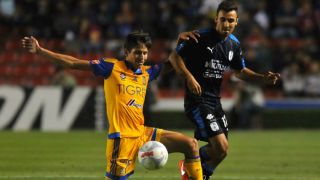 History will be made one way or the other when Queretaro and Tigres meet in the CONCACAF Champions League last four, with neither having ever made the final.

Queretaro host the first leg of the tie on Tuesday and will be hoping to taste some success following their poor start to the Liga MX Clausura.

Victor Manuel Vucetich's men sit third from bottom after 10 games, with just two wins and eight points to their name, but Paraguay international Edgar Benitez – a winner of the tournament with Pachuca in 2010 – is determined to rewrite the record books.

"We have already talked about it, there was a talk among all the team-mates," he said. "The objective is to make the Liguilla and, in CONCACAF, we want to fight and make history."

A 2-0 loss to Leon at the weekend made it five games without a domestic win, but Queretaro will be spurred on from their 3-1 aggregate triumph over MLS outfit DC United in the last eight of the Champions League.

Vucetich is a three-time winner of the competition, having claimed the tournament three times in a row with Monterrey between 2011 and 2013, and will seek to call on his experience to help guide Queretaro to the final.

However, Tigres will be no pushovers despite being in a slump of their own, with Ricardo Ferretti's side winless in their past three outings.

Tigres are the reigning Mexican champions, but a draw and a loss in their past two league games has seen them drop off the pace set by leaders Monterrey.

Ferretti's men qualified for the semi-finals courtesy of a 3-1 aggregate win over Real Salt Lake and boast Liga MX top-scorer in Andre-Pierre Gignac.

The spoils were shared when the sides met at Queretaro in February, when Gignac opened the scoring before Juan Forlin and Marco Jimenez turned the match in the hosts' favour.

But Javier Aquino levelled matters and Queretaro finished the match with 10 men, as Yerson Candelo picked up a second yellow card.