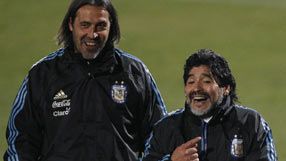 Following in the footsteps of Ubaldo Rattin in the 1960s and Americo Gallego in the 1970s, Batista helped Argentina win their second World Cup title with Maradona in Mexico in 1986.

A quiet man in complete contrast to Maradona, Batista was Argentine Football Association (AFA) president Julio Grondona's choice as he sought to steer Argentina away from the controversies of the Maradona reign.

Batista, who turns 48 next Tuesday, also appears to have been the choice of 1986 coach Carlos Bilardo, for whom Batista was a mainstay at two World Cups, also helping Argentina reach the 1990 final in Italy.

He emerged at Argentinos Juniors, the modest Buenos Aires club that had launched Maradona, with astute tactical awareness and good ball control.

He reached a pinnacle in his club career when he helped Argentinos Juniors win domestic and South American titles and only narrowly miss out on being crowned world champions in 1985.

The death of Batista's father contributed to his descent into drugs in his late playing career and, like Maradona, he fought a cocaine addition in the 1990s.

"The loss of my father coincided with my addiction to drugs," Batista said in a recent television interview.

"I felt lost, I lacked something pretty big and I fell down in all senses and even stopped playing football," added Batista, who during a two-year spell with Tosu Futures in Japan had intensive treatment to deal with his drug dependency.

A coaching career mainly with second division sides in Argentina and Uruguay led to his appointment to the AFA juniors teams and in 2008 he steered Argentina's under-23s to the Olympic gold medal at the Beijing Games.

His Olympic side was the embryo of the senior team he might have taken over when Alfio Basile quit unexpectedly in late 2008 and if Maradona had not persuaded Grondona he was the right man for the job.

The team, who beat Brazil in the semi-finals, included former world under-20 champions Lionel Messi, Angel Di Maria and Sergio Aguero and Juan Roman Riquelme, one of the over-age players, whom Maradona discarded but looks set for a return under Batista.

When Maradona was refused a new contract after his side were crushed 4-0 by Germany in the 2010 World Cup quarter-finals in South Africa, Batista took charge in an interim capacity.

He has presided over a 1-0 win away to Ireland, a 4-1 defeat of world champions Spain in Buenos Aires and a 1-0 loss to Japan in Saitama.

Now officially the man to steer Argentina to the 2014 finals, his first match is against arch-rivals and World Cup hosts Brazil in a friendly in Qatar on November 17.

His true test comes next year when Argentina host the Copa America, the South American Championship, having not won it since 1993 when they lifted their last trophy.