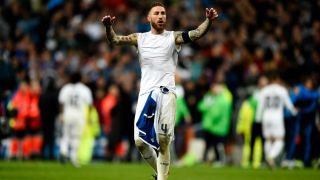 Real Madrid president Florentino Perez has no issue with Sergio Ramos' wages, claiming he deserves more than he earns.

The Spain international signed a new five-year contract last year to keep him at Santiago Bernabeu until 2020 in a lucrative deal.

However, while discussing a number of key matters ahead of Madrid's annual assembly, Perez insisted Ramos had every right to be handed a pay rise.

"[Ramos] has been here many years," he told club delegates, in quotes reported by AS.

"He deserves what he earns and surely deserves more. He is our captain, a phenomenal example [to other players]."

Ramos led Madrid to their 11th Champions League title in May, scoring in the final as he had done in their previous European success two years before.