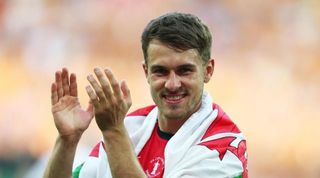 But Palace, playing on the back of Tony Pulis' shock departure as manager on Friday, absorbed early pressure before debutant Brede Hangeland headed them into 35th-minute lead at the Emirates Stadium.

It evoked uncomfortable memories of Arsenal's 3-1 collapse at home to Aston Villa on the opening day of last season, although Laurent Koscielny eased fears by hauling Wenger's men level in first-half stoppage time.

Frustrations continued after the break, but, following a second yellow card for Palace winger Jason Puncheon in the 89th minute, Ramsey pounced on set-piece uncertainty to steal a 2-1 win - Arsenal's first on the Premier League's opening weekend since thrashing Everton 6-1 in 2009.

"The last few seasons we struggled in the first game of the season and we nearly did," the Wales midfielder told BBC Sport.

"It was important we kept on trying and we came away with the win.

"I didn't have the best of games but I kept on trying, kept getting into the right areas and finally, in the 93rd minute, it went in."

Having scored the winner against Hull City in last season's FA Cup final and Arsenal's second against City last weekend, Ramsey is enjoying a hot streak in front of goal.

"He has something of a rare gift - that is to be where you need to be in the box," said Wenger on Sky Sports, where he offered praise to Palace for their display.

"Credit to Palace - they worked hard, were physically very strong and very organised.

"We gave ourselves a difficult task. They gave us big problems and defended very well

"We keep going - that's one of our strengths and it paid off.

"The change of pace in the final third [could have been better]. That is usually one of our strengths.

"Is it down to the quality of defending or the fact that we are not there physically yet? Maybe a bit of both."

Ramsey agreed with his manager's assessment and noted that Pulis' influence lived on in Palace's performance.

"They were very hard to break down. They lost their manager earlier in the week, but you would never have known that," he added.

"Tony Pulis got them playing really well and they picked up a lot of points towards the end of last season. You could see they were well organised and it was difficult but we came away with the three points."