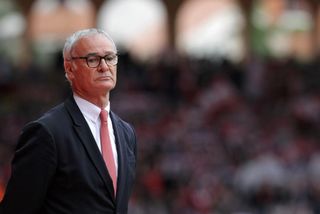 Dimitar Berbatov's cheeky fifth-minute lob from an angle was all Monaco needed to move eight points clear in second.

Ranieri was full of praise for his side after their display, and their ability to bounce back from their shock Coupe de France semi-final loss to Guingamp on Wednesday.

"A derby is never easy, from the beginning to the end," the Italian told a news conference.

"It was a very interesting game for both teams. We both needed to win.

"However, I am very, very, very, satisfied because my squad showed a lot of pride, and strong personality after the defeat in the cup.

"We played a great game with a lot of character against a team who are very determined."

Ranieri reserved special praise for Croatian goalkeeper Danijel Subasic, while hailing his team for fighting out the 90 minutes to claim three points.

"The first half was good. We get great chances in order to score the second goal. Nice, I think only played in counter-attacks," Ranieri said.

"We lost the ball several times in the midfield. Subasic is a great goalkeeper. During the second half we controlled the game. We were good.

"We've played a lot of games so it is normal to suffer sometimes. It would be too easy if you always win 2-0 or 3-0, but it is impossible.

"The important thing is to win the derby. And how the team fought, played compact, suffered, it is great. It was impossible to perform better than that."