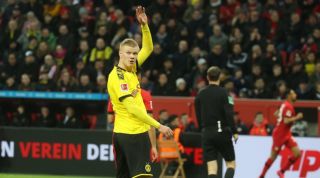 Haaland only joined Dortmund from Red Bull Salzburg in January, but has made an immediate impression by scoring 12 goals in his first 11 games.

Madrid are hoping to improve their attack, with Luka Kovic having failed to impress in his first season at the Estadio Santiago Bernabeu.

Karim Benzema has also been short of form since Christmas and there is a concern about where the goals are going to come from.

Still only 19 years old, Haaland chose Dortmund as his next club because he believed it would aid his development.

However, Los Blancos think the Norway international has already shown enough to suggest they should make a move for the striker.

Haaland has a £50m release clause at the Signal Iduna Park, although it is unclear whether that can be activated as soon as this summer.

QUIZ Can you name the 30 most expensive transfers of the past 12 months?