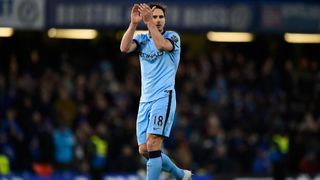 Lampard came on as a 77th-minute substitute, with his current employers trying in vain to force a victory that would have reduced Chelsea's five-point advantage at the Premier League summit.

The 36-year-old is Chelsea's record scorer with 211 goals over 13 years with the club, but moved to City on a complex free transfer in August and memorably netted the equaliser when the teams met at the Etihad Stadium earlier in the season.

A July move to Major League Soccer newcomers New York City - who thought they had signed the midfielder when he left Chelsea - awaits Lampard, who enjoyed a lengthy ovation from the Chelsea faithful on Saturday, when City playmaker David Silva cancelled out Loic Remy's opener on the stroke of half-time.

"I was excited about the day but obviously a bit nervous," Lampard told Sky Sports.

"I enjoyed it. I was delighted with the reception from both [sets of] fans.

"Manchester City fans have been brilliant for me up there. Chelsea fans, quite rightly, they get behind their team and they showed complete class at the end by giving me an ovation.

"I'm pleased for that moment because I didn't get that at the back end of last year and I've managed to have a moment there today. I'm very thankful for that."

Lampard conceded there was slight disappointment in the City dressing room after Manuel Pellegrini's team dominated the second half - Chelsea's exertions in their extra time League Cup semi-final win over Liverpool on Tuesday night taking their toll.

"To be fair to Chelsea, they had a big game in midweek - 120 minutes - and I think the draw probably suits them better in the long run. It keeps them five points ahead," he added.

"I think it was a good performance all-round, a good game. It probably lacked that little bit of electricity that sometimes big games need.

"Chelsea probably accepted the point, which they do so well. I know they can defend leads - I was here a long time!

"There's maybe a bit of disappointment but there’s a long way to go on all fronts."