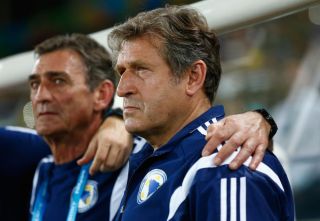 Defeats to Argentina and Nigeria in Group F ended Bosnia's hopes of reaching the next round, with Wednesday's clash against Iran in Salvador a dead rubber for the World Cup debutants.

It could have been a lot different for Bosnia had Edin Dzeko's opening goal against Nigeria not been incorrectly ruled out for offside in Cuiaba last week, according to Susic.

"If we had more luck or were more realistic or fairer refereeing decisions… then this team could have progressed to the last-16," Susic told reporters on the eve of Bosnia's fixture at the Itaipava Arena Fonte Nova.

"Because whoever watched that match... would have seen our goal disallowed, and we would have needed only one point for our match tomorrow to make the last 16."

"The boss has said most of the things I wanted to say," Spahic told reporters.

"We are not satisfied with what we were able to show here, but speaking objectively, there some other factors that have decided our fate.

"I don't want to discuss these things now. I want to look to the future, we have another match tomorrow. Another experience. And we will try to be as positive as possible."