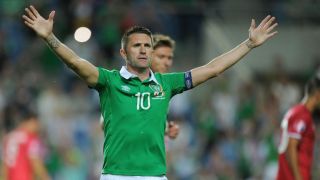 An emotional Robbie Keane vowed to continue following Ireland as a supporter after ending his international career with a superb goal in the 4-0 friendly win over Oman.

The 36-year-old's first-half strike, his 68th for his country, saw him flick the ball over the head of his marker before thumping it home on the volley.

Robbie Brady's early free-kick and two fine finishes from Jon Walters completed a comprehensive victory for Martin O'Neill's side, who start their World Cup qualifying campaign with a trip to Serbia on Monday.

But it was all about Keane at the Aviva Stadium as he brought the curtain down on an international career that began in 1998.

The LA Galaxy striker was substituted just before the hour-mark and was clearly touched by the reception he received.

"All I can say is thank you very, very much to everyone that has come out to support me," he told RTE.

"It's been a wonderful 18 years and I've enjoyed every minute of it.

"First and foremost the lads have a game on Monday, but I'm just delighted that the manager gave me this opportunity to say goodbye to the fans.

"All I can do is wish the lads all the best for Monday and going forward.

"I was a fan when I was 17 years of age making my Ireland debut and now I'm looking forward to sitting back in the stands as a supporter again and watching this team go forward with their magnificent coaching staff.

"I could feel that all the crowd and players and management staff were desperate for me to score one last time.

"I'm delighted that I got the goal to finish off on a high with this fantastic group of players and staff.

"And to the best fans in the world, I just want to thank you very much and wish you well."

Seamus Coleman, John O'Shea and James McCarthy, meanwhile, are all expected to be fit enough to feature against Serbia despite watching the Oman clash from the stands.