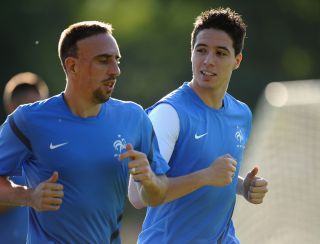 Ribery has had an outstanding year for Bayern Munich, helping the team to an unprecedented treble in Germany as they collected the Bundesliga, UEFA Champions League and DFB-Pokal titles last season.

The winger has replicated that form on the international scene with a string of fine performances for France.

And Nasri feels Ribery should be awarded the individual honour ahead of the likes of Lionel Messi and Cristiano Ronaldo.

"Ribery has been accused of failing to show up for France but he carries the team these days. He would be great for any team," the Manchester City man said.

"He was already voted UEFA's Best Player in Europe and I really hope that he wins the Ballon d'Or as well. It would really be the crown on his career.

"I don't know Lionel Messi and Cristiano Ronaldo personally but I do know Franck. He has won everything he could win this year."

Nasri and Ribery both featured for France in their 3-0 FIFA World Cup qualification triumph over Finland on Tuesday.

Ribery opened the scoring in the game, but Didier Deschamps' side had to settle for a play-off place after finishing second behind reigning world champions Spain in Group I.

France missed out on being one of the four seeded teams, meaning they face a showdown with Croatia, Portugal, Greece or Sweden.

But Ribery is confident of securing progression regardless of who they come up against.

"It is always complicated but we will not hide, we will be men and no matter who we're playing, we'll do everything to go to Brazil," he commented.

"I think there are no easy teams. It is always complicated and they are difficult matches."