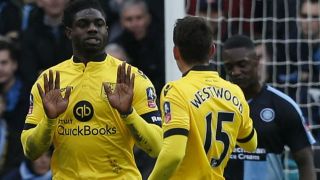 Richards opened the scoring for the Premier League's bottom side with a fine goal but they were pegged back by Joe Jacobson's penalty.

As angry Villa fans berated Garde and the team, Richards approached supporters who were sat behind the dugout after he was substituted late in the game.

"It was brave of him to do that," said Garde.

"As professionals we have to face our responsibilities - not only Micah, me and all the players."

Villa have not won in the Premier League since the opening weekend of the season and now face a tricky replay against Wycombe at Villa Park.

"To be fair I didn't see the [Richards] incident, but I've been told about it," Garde said. "I understand that the fans could be angry.

"We have to accept that, as a player, a manager, everybody at the club has to accept that criticism, because we are not winning - that's football."

Villa supporters chanted "you don't know what you're doing" at Garde following the substitution of winger Carles Gil.

"Everybody has to keep calm, face their responsibilities, look in the mirror and ask themselves what they can do to get out of this difficult situation."