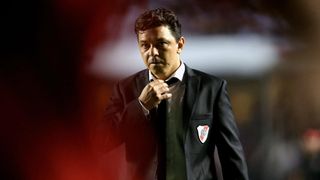 River Plate edged Lanus 1-0 in the first leg of their Copa Libertadores semi-final in Buenos Aires on Tuesday.

River, who sit second in the Argentine Primera Division, needed an 82nd-minute goal from Ignacio Scocco to secure their win at their Estadio Antonio Vespucio Liberti home.

Marcelo Gallardo's men had looked the more likely to open the scoring throughout.

Javier Pinola struck the post from distance early in the second half, but River would find their opener.

Lanus goalkeeper Esteban Andrada could only parry a low strike from Gonzalo Martinez and former Sunderland forward Scocco reacted quickest to put away his seventh Libertadores goal of the campaign.

The result leaves River on track to reach a sixth Libertadores final ahead of the second leg at Lanus next week.