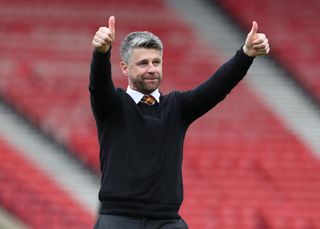 Motherwell manager Stephen Robinson praised his players for “the best performance of the season” as they eased past St Mirren 2-0 at Fir Park.

Goals from James Scott and Chris Long in either half sealed the victory but the margin of victory could have been greater as Well dominated.

And Robinson was more than satisfied with how his players had performed as they stretched their lead over fourth place to four points.

He said: “I thought in the first half that was our best performance of the season. Some of our combinations and passing was very good.

“We should have been out of sight and it could have been three or four clear at half-time. Their keeper has made some great saves.”

The breakthrough arrived after 39 minutes and it was a terrific strike, with Scott taking a pass from Barry Maguire and firing it into the top corner.

Long then made sure of the points with Motherwell’s second goal four minutes from time, cutting inside before firing high past Vaclav Hladky.

Robinson revealed afterwards that he had spoken to Steve Clarke about his Motherwell players but insisted he would not try to influence the Scotland manager’s thinking.

The Well boss added: “I spoke to Steve about a few of our players but he has a hard enough job without me giving him names. He is a super manager and I have so much respect for him. Given the time he will turn Scotland around.

“I know he has watched a few of our players. Allan Campbell, Declan Gallagher and Liam Polworth have done great.”

St Mirren boss Jim Goodwin was again a frustrated figure as his side failed to score for a third game on the bounce. They slip to 11th in the table, just a point off the bottom.

He said: “We’re disappointed with the final result, obviously. In the first half we showed them too much respect. We sat off them. The players were only doing what I asked them to do, I take responsibility for that.

“I thought we could exploit the space in behind on the counter attack but it didn’t quite work as I had hoped. In the second half we were a bit more on the front foot and it was a lot more even. In the first half my goalkeeper had too much to do.

“He had two or three very good saves and we were happy to get in at 1-0. The second half was more like us and we had a couple of decent opportunities. But at this moment in time – as I’ve repeated in the last couple of weeks – it’s just not falling for us.”