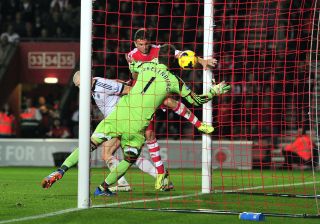 As well as being dangerous going forward, Mauricio Pochettino's side demonstrated why they have the best defensive record in the league having conceded just three times in their first nine matches.

The south-coast club are two points behind second-placed Liverpool and four adrift of leaders Arsenal as a result of their best start to a season in the top tier for 30 years.

Former Burnley striker Rodriguez feels Southampton are reaping the rewards of their hard work on the training ground and sees no reason why they cannot build on their impressive start.

"The gaffer has got us working with belief; we know we've got a lot of hard work to do and we're just focusing on the next game." he told Sky Sports 1.

"The training we do is extremely hard and it's showing on the pitch. We have to be really fit and it's working."

Rodriguez added: "It's unbelievable (to be third), I didn't realise that but I'm well chuffed.

"We haven't got a limit - the gaffer has put that out to us. We've got to keep working and look to the next game but there is no limit to what we can achieve."