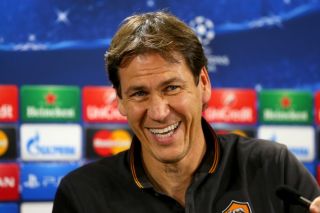 Garcia's men welcome Bayern to the Stadio OIimpico having claimed four points from their opening two matches in Group E, hammering CSKA Moscow 5-1 and earning a 1-1 draw at Manchester City.

The Italian capital club bounced back from a 3-2 defeat to Juventus prior to the international break with a 3-0 victory over Chievo on Saturday.

The hosts will be heavy underdogs versus the 2013 winners, who have yet to taste defeat in 10 Bundesliga and Champions League matches this season, scoring 23 goals and conceding just two.

But Frenchman Garcia is adamant his players do not fear Pep Guardiola's side and is eager for Roma to show the same ruthlessness in front of goal that they did at the weekend.

"We're outsiders, and we know that from the start," Garcia said.

"We've played two good games [in the Champions League] so far, but we must continue to play well.

"[It] will be an important game, and I expect a packed-out Stadio Olimpico, after that we'll see where we stand.

"We will have our chances, and we’ll have to take advantage of them when we do.

"Can we beat Bayern? Anything can happen in football. It will be tough, because they're one of the strongest teams in the world, both in economic terms and on the pitch.

"But we'll try to make everything difficult for them and try to get some points.

"We respect everyone, but we aren't afraid of anyone.

"We're facing a great team, but we have great players and we want to do well with 70,000 people on our side.

"The important thing is not to play this game as spectators. We hope to come out with a positive result."