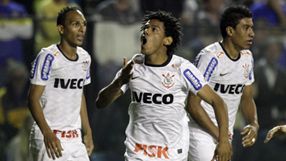 Romarinho had been on the pitch less than three minutes as a substitute for Danilo when he scored the equaliser after defender Facundo Roncaglia had put Boca ahead midway through the second half.

Boca, playing in their 10th final and seeking a record-equalling seventh title, went ahead at a corner when striker Santiago Silva's header was blocked by a defender with his hand and the ball fell to Roncaglia who blasted it home.

Roncaglia, booked in the 18th minute, was fortunate to be on the pitch having avoided a second yellow card near the end of the first half for a tackle from behind on striker Emerson.

Boca's substitute striker Lucas Viatri almost put the home side ahead again in the final minute but his header from left-back Clemente Rodriguez's cross hit the bar.

Corinthians, who have reached their first final unbeaten, will be pleased with the result and fancy their chances of victory at home in Sao Paulo in the second leg next Wednesday.

Boca, however, have a good record away to Brazilian teams in South America's elite club tournament.

Boca set out to get a win at home but crashed against the tight Corinthians defence that had only conceded three goals in their previous 12 matches in the competition.

Corinthians midfielder Paulinho then had a shot on target but goalkeeper Agustin Orion palmed the ball away conceding a corner.

The Brazilian side gradually took a stranglehold on midfield and limited Boca's attacking chances with defender Alessandro blocking striker Santiago Silva's overhead effort just past the half hour.