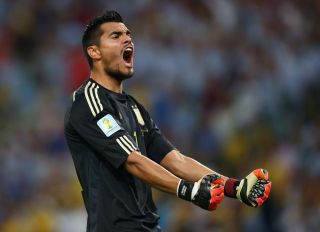 The Monaco goalkeeper featured in Argentina's Group F opener against Bosnia-Herzegovina as a Sead Kolasinac own goal and Lionel Messi's strike helped them to a 2-1 win.

Romero made only four starts for his club last term but has held off competition from Mariano Andujar and Agustin Orion to be his nation's number one.

The 27-year-old revealed that Sabella's man-management expertise had been key in helping him prepare for the competition in Brazil.

"Sabella is a coach who is always aware of how one is both physically and emotionally," he told Telam.

"From day one he said, 'these are my three goalkeepers'. I got messages from the coach or his goalkeeping coaches to check on me, even though I was not playing (at Monaco).

"For all that I can only be grateful that Sabella gave me continuity.

"It was a good thing he gave me that support - even more so in the goalkeeper position and I value that."

Romero will likely continue in goal for Sabella when Argentina face Iran on Saturday.