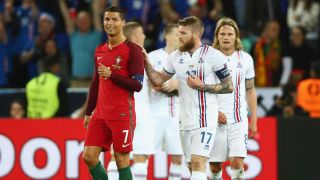 Iceland midfielder Aron Gunnarsson has denied suggestions Cristiano Ronaldo showed a lack of respect following Tuesday's tetchy Euro 2016 encounter with Portugal - but did admit to being "custard-pied" by the Real Madrid star.

Television footage showed Gunnarsson asking Ronaldo to swap shirts at the final whistle with reports claiming the latter said "who are you?" to the Cardiff City man in an act of petulance.

Gunnarsson insisted that was not the case and stuck up for the 31-year-old.

"He said 'inside' [the tunnel], there was no problem," explained Gunnarsson. "He wasn't asking who I was. He's not like that as a person, even though I don't know him. I asked him for his shirt and he said 'inside'. The rumours are not true."

Asked which Hungary player he would target for a shirt after the game in Marseille on Saturday, he replied: "Probably no-one as I got custard-pied last time!

The war of words between the Iceland and Portugal camps following the game in Saint-Etienne - Ronaldo described the tournament debutants as having a "small mentality" - has done little to diminish the euphoria of the Iceland fans back home.

Gunnarsson added: "The Icelandic people are always interested in whatever sport our sportsmen are doing.

"There's a lot of interest, it’s the first time the football team has been in the finals and even before that the tournament always interested people back home.

"It's going mental in Iceland, it's perfect, we can feel it, we embrace it and will try to use it in a good way."

Gunnarsson admitted his phone was "out of battery all the time" due to the messages of goodwill and striker Kolbeinn Sigthorsson felt Iceland's achievement of holding Portugal had been noticed on a global scale.

He said: "We feel the support we have from Iceland and the rest of the world. It seemed we surprised the world by drawing with Portugal but we have to stay grounded and focus on the next game."