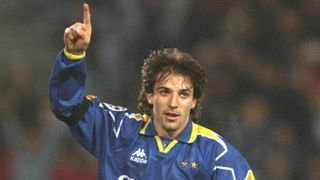 Cristiano Ronaldo is accustomed to setting standards of excellence rather than meeting them, having torn up club records and won an array of team and individual honours during nine years at Real Madrid.

With his power showing few signs of waning at the age of 33, the Portuguese star arrives at Juventus carrying expectations no other forward of his age would shoulder, in an arena where greatness is par for the course.

Across 121 years of history, some of world football's finest players have passed through Turin and worn the black and white shirt with such poise and grace that even the five-time Ballon d'Or winner may find himself daunted by the prospect of attempting to emulate the club's most revered names.

A Juventus great on and off the field, Boniperti enjoyed his highest scoring campaign in just his second season with the club when he netted 28 goals in 41 games at the age of 19, in 1947-48. Five Serie A titles and two Coppa Italia trophies later, the versatile forward called time on a 15-year career spent exclusively at Juventus before later becoming chairman of the club.

In the latter part of Boniperti's time at Juventus, the club signed an overseas player whose goal-scoring exploits would become legendary. The imposing figure of Charles, known as 'Il Gigante Buono' (The Gentle Giant), scored 108 goals in 155 league appearances – a ratio that will not daunt Ronaldo, but he may struggle to match the Welshman's humble, shy demeanour off the field.

In the 1970s and 80s, Juventus and Italy were sides opposition players feared, and much of that was down to Gentile. A proponent of the professional foul, Gentile's name belied his playing style, once described as "exquisite barbarism". The Libyan-born defender was pivotal in Juve winning six league titles during his glittering 11-year spell at the club.

While he divides opinion as one of football's figureheads, Platini's legacy at Juventus is not in dispute. Top scorer in Serie A three years in a row - playing from midfield - and three-time European Footballer of the Year during five seasons in Turin, Platini was one of the most artfully creative players to have wowed the Bianconeri faithful.

No matter what Ronaldo achieves at Juventus, he will not displace Del Piero in the hearts of the club's supporters. In a team that featured such luminaries as Roberto Baggio, Zinedine Zidane, Didier Deschamps and Gianluca Vialli, Del Piero emerged as the fans' favourite for his tireless industry, spectacular goals and unswerving loyalty across 19 trophy-laden seasons at the club.