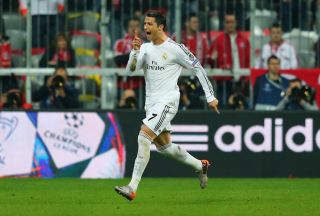 The Portuguese attacker scored a brace, after Sergio Ramos' four-minute double propelled Real to a healthy 3-0 aggregate lead at the Allianz Arena.

Ronaldo made it 4-0 overall in the 34th minute, before his cheeky free-kick in the 90th minute snuck under Bayern's jumping wall and into the back of the net.

The former Manchester United man said it was a monkey off the back of the Madrid club, who had fallen at the semi-final hurdle in the past three European cups.

"We showed a very good attitude and we deserved to reach the final," Ronaldo told the club's official website.

"I'd like to thank all the players for their effort and now is time to enjoy the moment and play the final to win.

"We have been losing in the semis for a long time, three or four years, but the most important thing is that now we are in a deserved final and we have our feet on the ground.

"Since the Champions League started we have taken it step by step and match by match."

Ronaldo broke the record for most goals in a European cup campaign, with his brace on Tuesday taking him to 16.

And he said he had been looking to become the most proficient scorer in a season of the illustrious tournament, and he praised team-mate Gareth Bale for providing him with a slice of history.

"I was looking for it and I knew I needed one goal but I was not going to be mad if it didn't happen," Ronaldo said.

"It was a great ball from Bale. The whole team helped me.

"I'm really happy to break the Champions League record but what I want is to win it and we're very excited.

"A final is always complicated.

"I don't care if it's (against former Real coach Jose) Mourinho or another coach. It will be in my country (Portugal) and I want to win the Champions League."

Defender Pepe said Real coach Carlo Ancelotti instilled a winning mentality into his charges, ahead of their daunting trip to the Allianz Arena.

"Ancelotti always told us we were going to win here (in Munich)," Pepe said.

"We had the confidence to record a victory here and in our quality and hard work.

"Having kept a clean sheet against Bayern is due to the hard work of the whole team. Not just one player."